Introducing the new Toyota Tundra TRD Pro! The world got its first look at the new Toyota TRD Pro Series at the Chicago Auto Show in early February. The TRD Pro trim is only available on three select Toyota models, including the Tacoma, Tundra and 4Runner.

At the show Toyota showcased all the 2019 Tundra TRD Pro’s new features and engineering updates, including a sneak peek at the model’s improved performance. Perhaps some of the most significant additions for 2019 are the suspension updates and new Fox shocks. 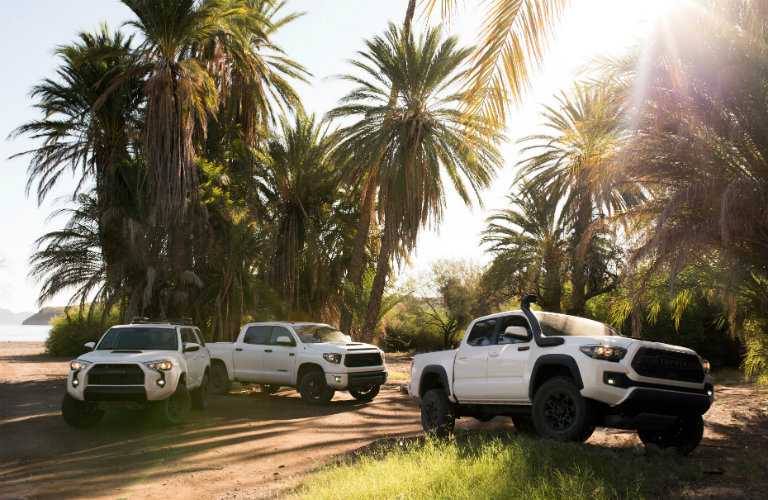 For 2019, the Tundra TRD Pro receives Fox 2.5-inch front and rear shocks with 46 mm pistons and TRD-tuned springs for 2 inches of added lift. There’s also new Rigid Industries LED fog lights and redesigned TRD Pro grille. The new 18-inch BBS forged-aluminum, five-spoke black wheels also add another level of style and functionality. Paired with Michelin all-terrain tires, the Tundra TRD Pro is even more confident on the road, no matter what the road conditions may be.

Inside the cabin are a variety of TRD Pro signature details, including red-stitched accents on the upholstery, TRD Pro floor mats and much more. That distinct TRD Pro detailing continues on the body of the vehicle and includes TRD Pro stamping on the rear quarters. There’s also a dual exhaust with Black Chrome exhaust tips and a ¼-inch skid plate. Standard safety features are plentiful and include vehicle stability control, traction control, brake assist and the Toyota Safety Sense P suite of technologies.

When is the 2019 Tundra TRD Pro release?

Best of all, the full TRD Pro Series is expected to go on sale as early as fall 2018. Stayed tuned for more news on these sleek new models as more information becomes available. From all of us at Le Mieux & Son Toyota, thank you for reading!

This entry was posted on Monday, February 12th, 2018 at 11:24 pm and is filed under New Models, News, Toyota, Tundra. You can follow any responses to this entry through the RSS 2.0 feed. You can skip to the end and leave a response. Pinging is currently not allowed.